The original ADI-2 Pro model is the brain-child of RME’s Head of Design Matthias Carstens, who designed it to be his own personal AD/DA converter and headphone amplifier (after he’d continually been disappointed other offerings on the market…).

An early prototype was shown at several trade shows around the world. Such was the positive feedback – with many passers-by asking “when’s it going to be available?” – the decision was made to release the device publicly, and the ADI-2 Pro quickly took the crown of RME’s best-sounding device to date.

The range has since been expanded into a selection of high-end recording and playback devices that cover a wide range of applications. Mastering engineers use the original ADI-2 Pro to handle front-end conversion duties, whilst Hi-Fi enthusiasts continue to be impressed by the ADI-2 DAC FS, for its combination of exquisite DA conversion and powerful headphone amplification.

With the entire product series built into compact half-rack 9.5” casings, each one packs a huge amount of features and I/O into a reference-class audio device that can easily slot into even the smallest of studios. 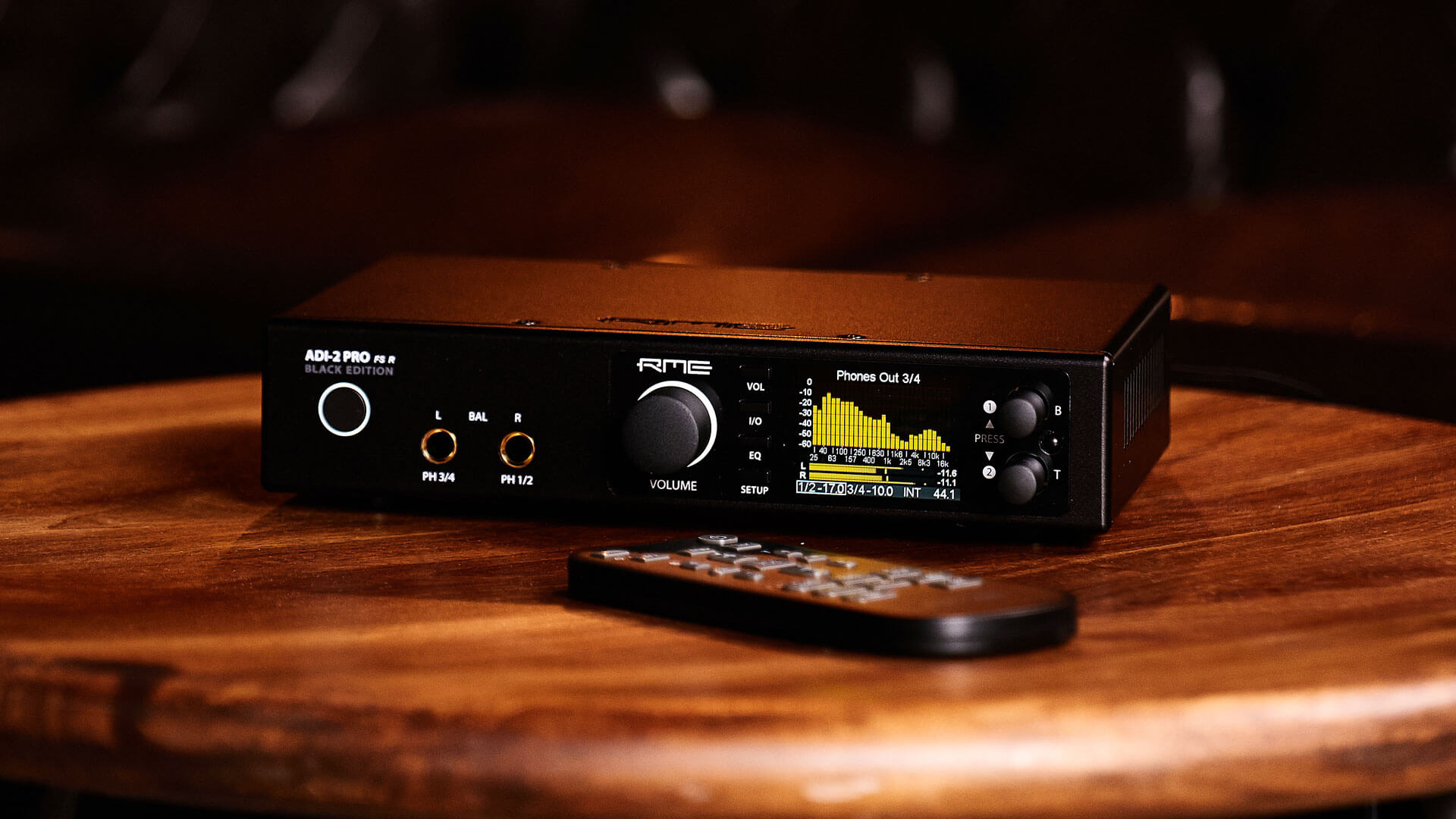 RME’s reference AD/DA converter is an USB 2.0 DAC, interface and a high-end headphone amplifier. Its design, unique specifications, user features and its ability to deliver crystal transparency, make it perfect for mastering and measurement applications as well as the ultimate tool for audiophiles everywhere.

The ADI-2 boasts high-grade components and intelligent circuitry throughout its half rack design. With RME’s fresh concept in Plug & Play the comprehensive feature set is easy to set up and use. Based on current connections the ADI-2 Pro FS R will automatically switch to AD/DA converter, USB interface or analog preamp mode. A specific mode can be set if required. 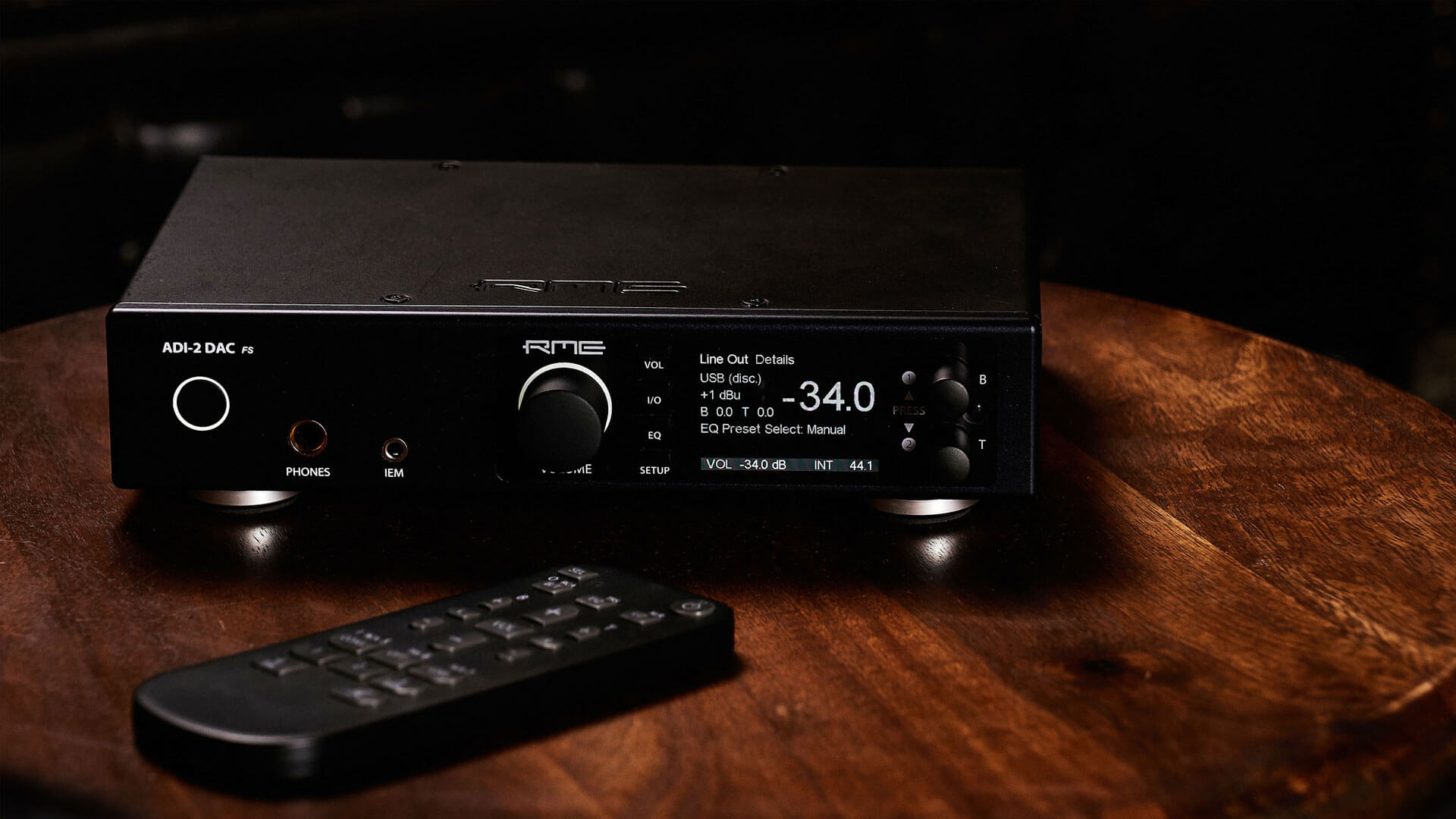 The ADI-2 DAC is the home and hi-fi optimized version of the ADI-2 Pro FS, a studio AD/DA converter of the highest quality. With many fresh ideas, innovative features and numerous useful functions, the ADI-2 DAC quickly became the reference. Thanks to its combination of high-end DA conversion with two exceptional headphone outputs, it has received countless enthusiastic reviews for its sound, flexibility, and technical capabilities.

The ADI-2 DAC includes SteadyClockFS , a fine-tuned to perfection analog circuitry, the new MRC remote control, extreme Power headphone output and a very special IEM output. It has all the bells and whistles that made the ADI-2 Pro famous, including its perfectly transparent sound signature and full DSP processing with Bass, Treble, Loudness, 5 Band Parametric EQ, Crossfeed and much more. With its simplified operation and stunning design it is the ideal center piece from home listening up to studio reference playback.

The ADI-2 FS is a compact and extremely flexible 2-Channel Hi-End AD/DAconverter. The small 9.5” unit offers first-class AD/DA-conversion from/to SPDIF, AES and ADAT, at up to 192 kHz. Its ability to use SPDIF, AES and ADAT format provides outstanding compatibility. Whatever it is - simply get connected!

Balanced analog inputs and outputs, monitoring via headphone output, SteadyClock FS for optimal conversion quality, 3-stage hardware input and output level control and the additional modes D-D and A-A turn the ADI-2 FS into a universal tool and a flexible problem-solver. Its pro-class sound qualifies it also as extension for other premium converters.

The analog inputs use the advanced circuit design of the highly acclaimed ADI-2 Pro, thus offering outstandingly low noise and distortion as well as an extended frequency response. Three different settings for input and output levels provide perfect compatibility in the analog domain.

In a class of their own 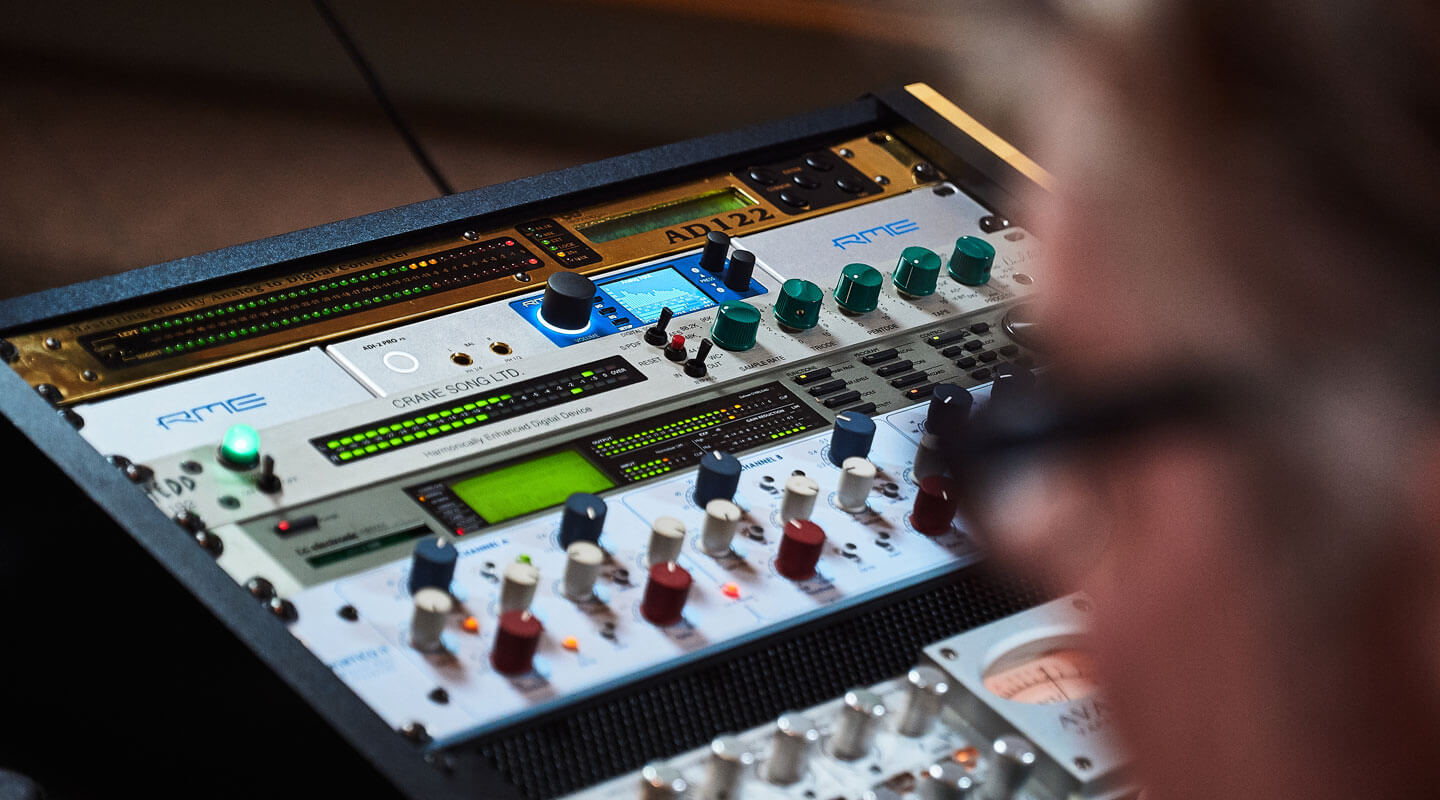 A new experience in Sound and Quality with sample rates of up to 768 kHz. The ADI-2 Series boasts high-grade components and intelligent circuitry throughout its half rack design. With RME’s fresh concept in Plug & Play the comprehensive feature set is easy to set up and use.

Both the ADI-2 DAC FS and ADI-2 Pro FS R feature on-board DSP processing, enabling advanced features like applying corrective EQ to all outputs (including separately for left and right channels), and a re-designed version of the ‘Loudness’ function found on many traditional Hi-Fi devices.

While headphones open the sound stage and make everything easier to hear and to locate by spreading the narrow sound field of stereo speakers to the left/right extreme, some people would like to have a listening situation that is more comparable to a standard speaker setup.

The ADI-2 DAC FS and ADI-2 Pro FS R includes Crossfeed to address this wish. Crossfeed reduces the artificial surround ambience that some productions have to make them sound better on speakers, but which sounds unnatural on a headphone. It uses the Bauer Binaural method, with five selectable strengths of narrowing the upper frequencies. This advanced method, which also includes a small delay and correction of the frequency response, works quite well, and is another useful addition as well as a unique feature.

The Series features also a high-quality, high-power headphone output with very low output noise. This is based around the proven High Power output found on many of RME’s other products.

The new black ADI-2 Series remote control provides buttons for standby on/off, volume, balance, bass and treble, input selection (optical, coaxial, USB), mute, on/off loudness, bass/treble and EQ. In addition, there are four programmable buttons that provide access for up to 52 different functions and commands for maximum flexibility. There is no other converter or comparable device with such a sophisticated, easy to use and at the same time versatile remote control!

In digital audio, the clock frequency is an essential factor, as it creates the correlation between the audio bits and the time reference. Unfortunately, the clock frequency is not always as stable as desired. The ADI-2 Series offers the latest SteadyClock FS technology for lowest jitter and highest jitter immunity. Excellent performance in all clock modes and High Quality Analog Conversion.

Digital format conversion in RME products are done without any loss or degredation, and SteadyClock FS ensures your sonic image will never experience degredation. This helps to optimize recordings and mixes because the soundstage has more depth and clarity. 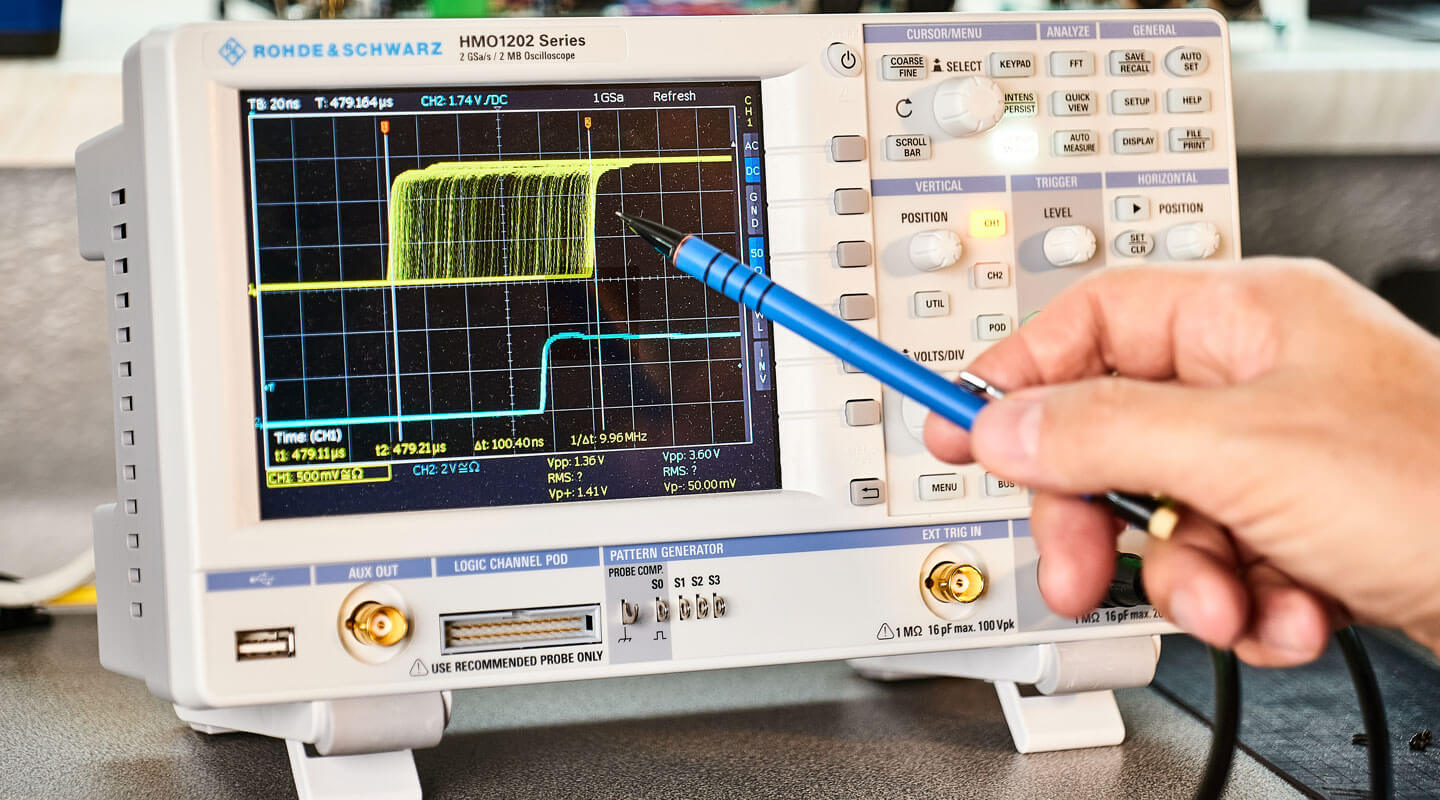 Pristine signal conversion, with jitter measured much lower than nanoseconds (ns)
or picoseconds (ps), in an area called femtoseconds (fs).

How to connect the ADI-2 Pro and TotalMix FX 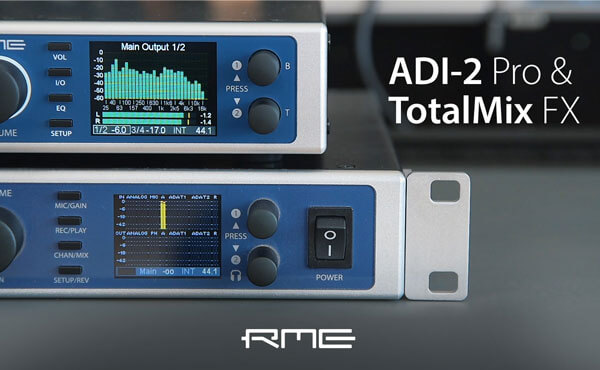 The ADI-2 Pro is the pinnacle of RME's audio converter range. A class-leading interface with an astonishing signal-to-noise ratio makes it one of the best choices for recording, measuring and mastering. 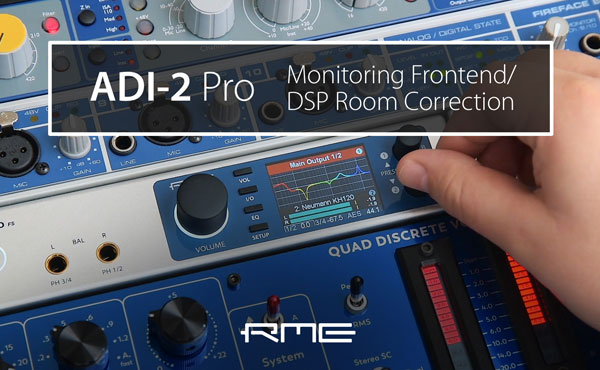 The ADI-2 Pro is the pinnacle of RME’s audio converter range. The class leading sound quality combined with the astonishing signal-to-noise ratio makes it one of the best choices for recording, measuring and mastering. 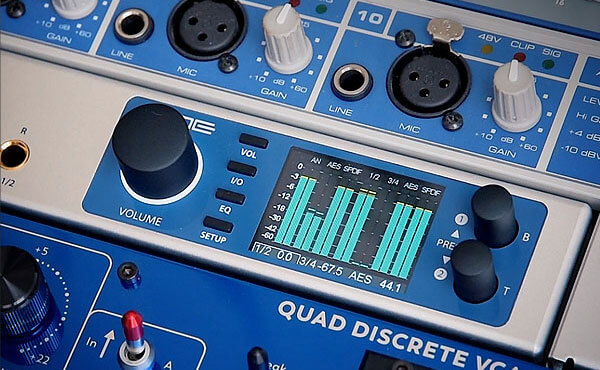 Digital format conversion in RME products are done without any loss or degredation, and RME's SteadyClock technology ensures your sonic image will never experience degredation. 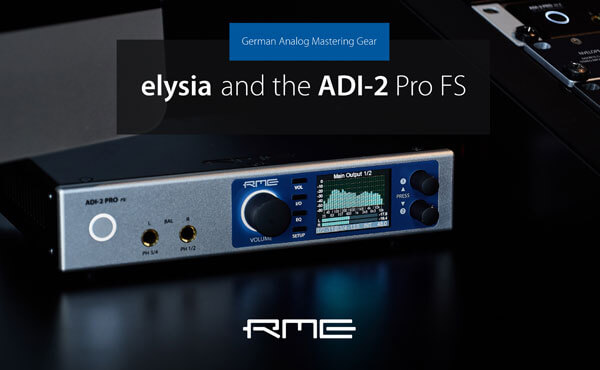 elysia is a team of audio enthusiasts with a portfolio of modern audio solutions for musicians, producers and engineers to create great recordings, mixes and masters. 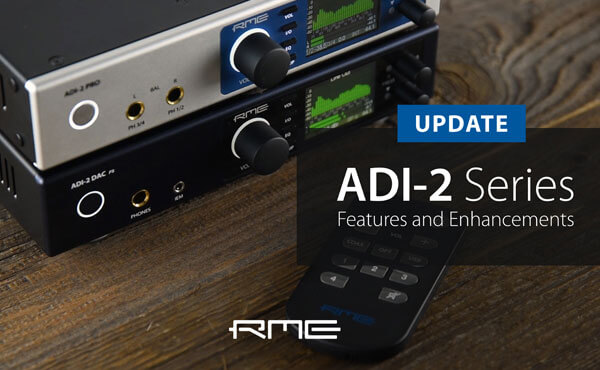 In the tradition of RME’s product philosophy, the ADI-2 series received a ton of new features and enhancements over the last three years. Because we can’t list every addition, here are some of our favorites! 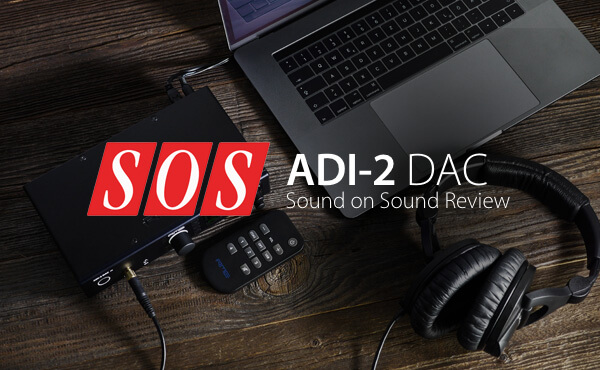 The RME Audio ADI-2 DAC is the perfect reference-grade centerpiece for everything from home listening to studio playback. Check out the review from Sound on Sound Magazine!

You want to be kept updated?

Sign up for the monthly Newsletter. You will be informed about new Products, Software Updates as well as Special Offers.