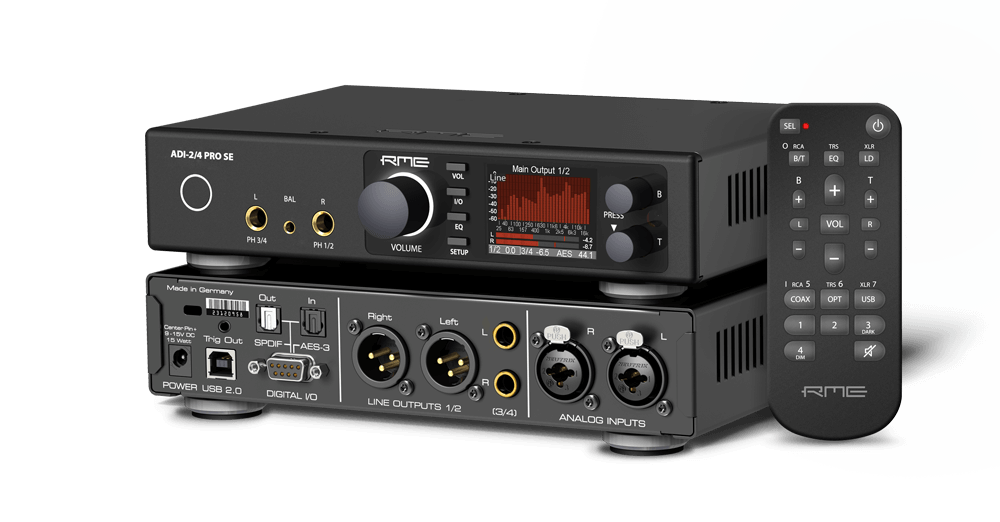 A Multitude of Devices compressed in one Housing

The ADI-2/4 Pro SE is a 2-channel analog input to digital and 4-channel digital to analog output converter in a half-rack (9.5") enclosure of 1 U height. Latest 32 bit / 768 kHz converters offer up to 123 dBA signal to noise ratio. Reference class tech specs throughout are combined with an unprecedented feature set. A powerful DSP adds all kinds of useful audio processing, including 5-band parametric EQ, fast Bass/Treble adjustment, Crossfeed, and a new concept in Loudness sound control.

Also available are optical SPDIF I/O, which also understands ADAT, as well as coaxial SPDIF (RCA) and AES I/O (XLR) via an included breakout cable. This universal set of I/O options offers superior quality and flexible connectivity to those who take a no-compromise approach to audio.

With independent balanced outputs for Line and Phones, balanced phones no longer mutes the rear outputs. Balanced Line and Balanced Phones outputs can be used simultaneously, even with different sources/signals. The balanced TRS in the back can be fed from Line 1/2 or Phones 3/4 signal path, perfect for handling insert effects during the mastering process. 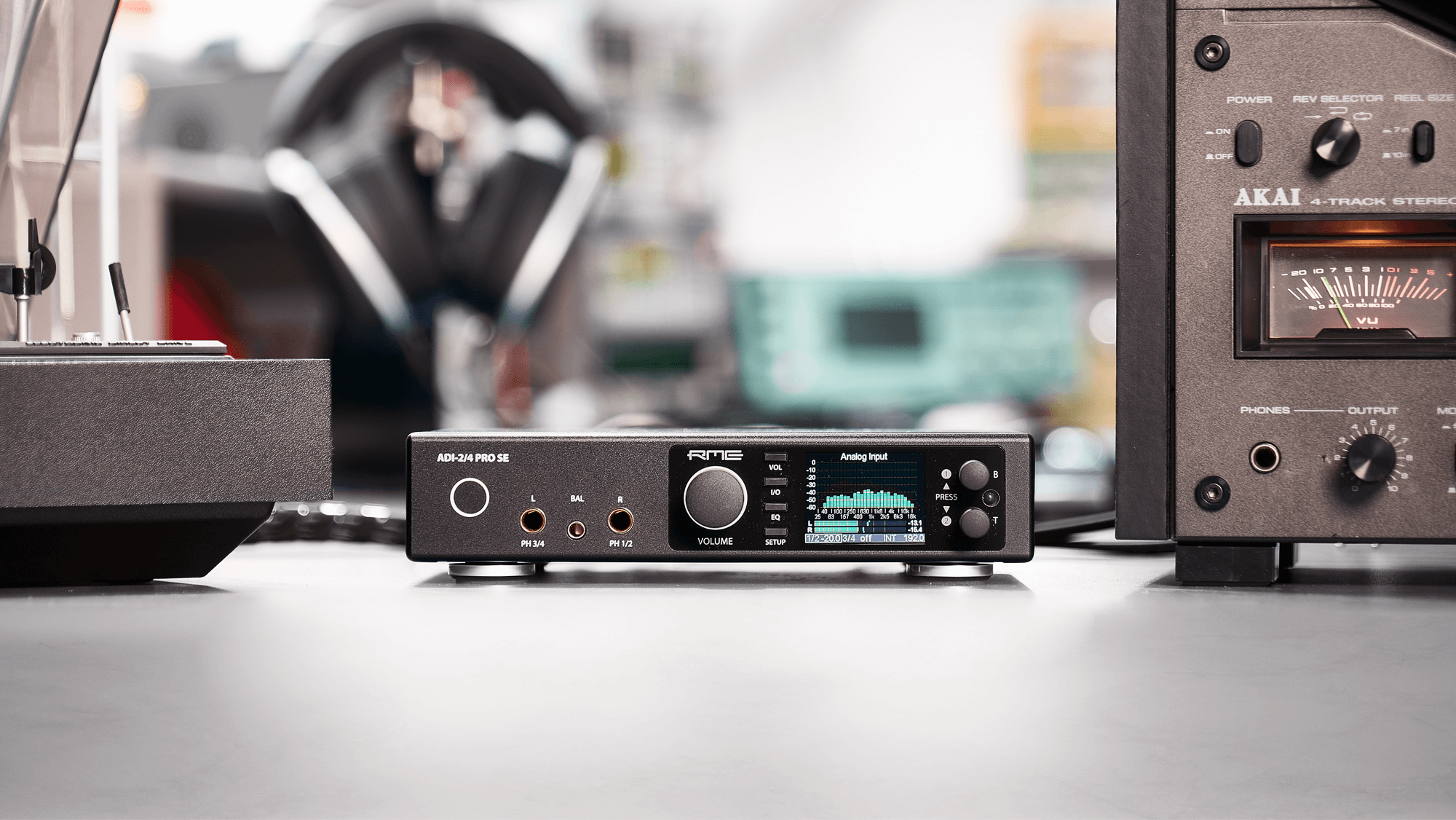 The USB 2.0 port is fully Class Compliant (UAC 2.0) a standard that is natively supported by operating systems like iOS, macOS, Linux and Windows 10 (since 1709), and is also used for firmware updates. Including an external switched power supply with lockable connector, the ADI-2/4 Pro can be easily powered from battery, opening up mobile applications as well as galvanically isolated use cases.

As a computer interface the ADI-2/4 Pro offers a stereo (2 in / 2 out) and a multichannel mode (6 in / 8 out). Compatibility with macOS comes right out of the box. Under Windows the ADI-2/4 Pro uses RME's MADIface series driver, for full WDM and ASIO compatibility and highest performance. 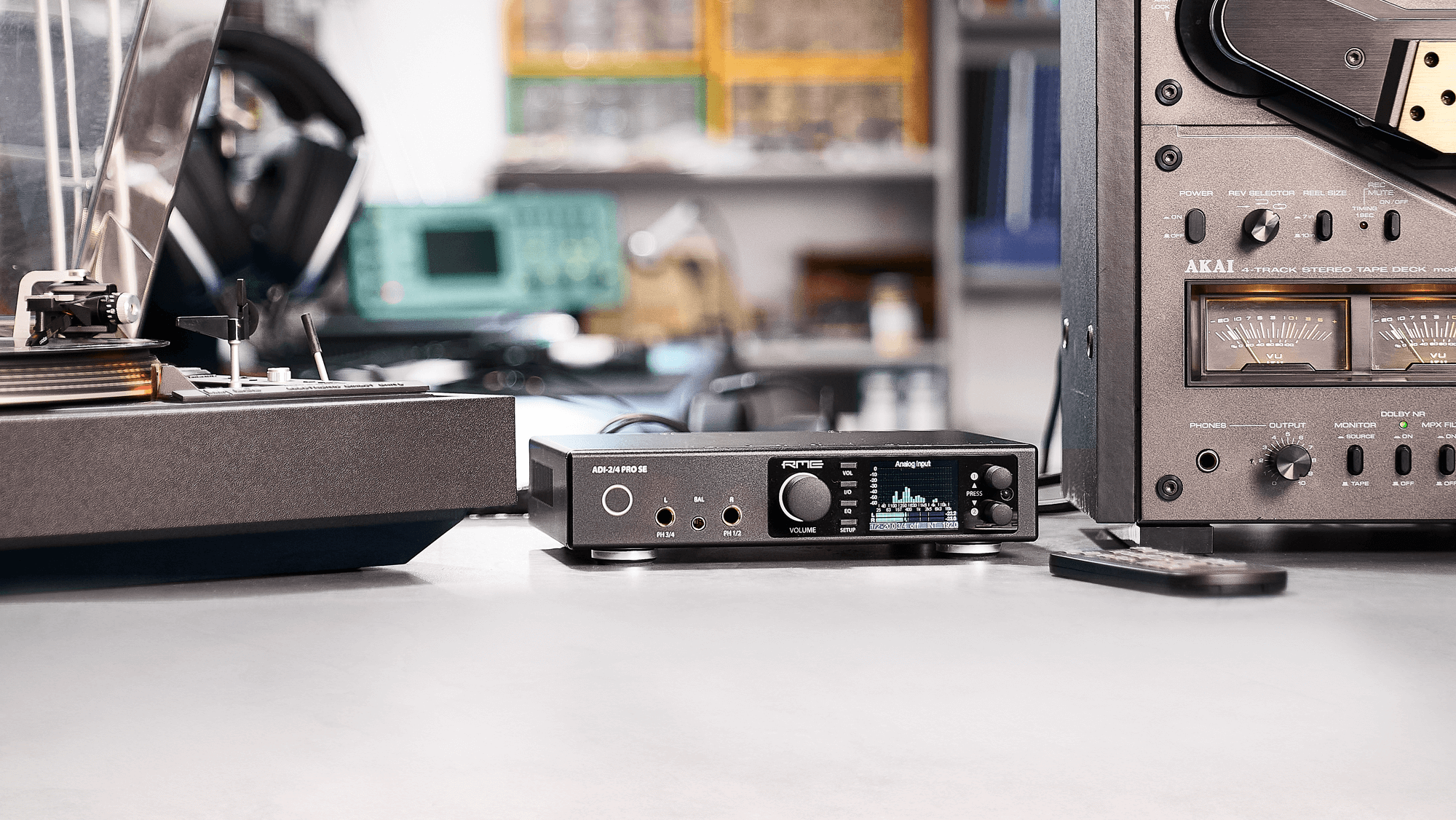 Even more Flexible and Powerful

The new Trigger Out socket provides a 12 V switching signal via 3.5 mm mono jack plug, which can be used e.g. to switch power amps with Trigger In on and off together with the ADI-2/4 Pro.

In order to make operating the ADI-2/4 Pro SE as flexible as possible, the unit has a universal DC input socket, accepting voltages from 9.5 Volts up to 15 Volts. An internal switching regulator of the latest technology with high efficiency (> 90%) prevents internal hum noise by operating above audible frequencies. Internally the switching regulator is followed by standard linear regulators, followed by super low-noise linear regulators. Therefore the ADI-2/4 Pro SE achieves its technical specs even with less optimal power supplies. Or in other words: the choice of power supply is not critical.

Shortly after the release of the original ADI-2 Pro we received many requests for digitizing vinyl records. Thanks to MM (Moving Magnet) compatibility, the ADI-2/4 Pro SE does not require an external preamplifier anymore and can directly conntected to turntables. It has suitable input impedance, RIAA equalization, and the necessary preamplification.

The ADI-2/4 Pro remote control provides buttons for standby on/off, volume, balance, bass and treble, input selection (optical, coaxial, USB), mute, on/off loudness, bass/treble and EQ. In addition, there are four programmable buttons that provide access to 52 different functions and commands for maximum flexibility. There is no other converter or comparable device with such a sophisticated, easy to use and at the same time versatile remote control . To control the ADI-2/4 Pro SE code table 3 needs to be activated so that the SEL LED lights up in red color.