With the resurgence of analog outboard gear and analog instruments, hybrid music studios have become more and more popular amongst recording engineers and musicians. Even though hybrid studios are fun, they require a constant and more importantly seamless workflow between analog and digital studio equipment.

One of the reasons, why switching between analog and digital recording methods can be challenging at times, are the different measurement techniques used for audio levels. This can lead to situations where the output level from your analog source is too high, causing the input of your interface to clip, even though you haven’t applied any amplification. Another phenomenon is overdriving the input of an analog device with your interface output signal, even tough the signal level is moderate and neither clipping in your DAW nor TotalMix FX. Fortunately, all these problems can be avoided by understanding some basic audio level principles.

Everything you need to know about analog and digital levels 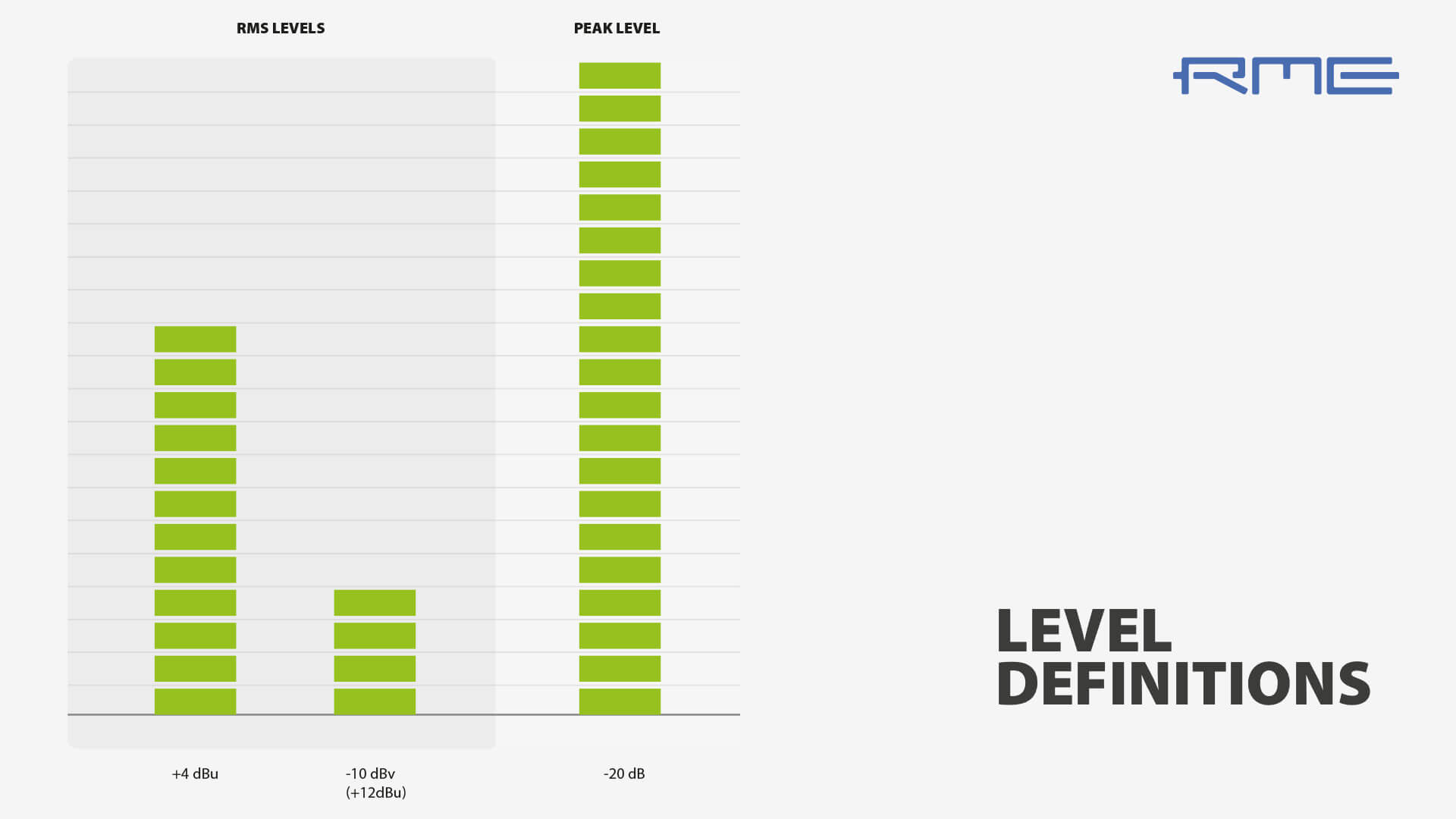 Over the past decades, two internationally accepted standards have been used in the music industry: +4dBu for professional equipment, which is often referred to as studio level. And -10 dBV for home electronics, widely regarded as consumer level. This may sound like an insignificant detail, but to mix these standards up can have huge negative effects on your recording, because +4 dBu studio level is in fact about 12 dB louder than -10 dBV consumer level!

To make life easier, both standards have been implemented in every RME interface and can be selected in the channel settings, if necessary. This will give you the best performance in every situation and for every analog source.

In the digital realm, audio is depicted as a string of zeros and ones. Because of this binary nature, analog signal levels such as dBu cannot be used to express digital levels. Instead, digital levels use so-called dBFS (decibels relative to full scale) which have a defined maximum peak level and a fixed scale. Therefore 0 dBFS is the maximum level that can be achieved in a digital system such as a DAW or software plugin. Everything above 0 dBFS will cause an overload and therefore clip the digital signal. It is therefore important to stay below 0 dBFS and give your digital signals sufficient headroom.

So your software programs, includingTotalMix FX, are showing you dBFS values, while your analog equipment, on the other hand, operates in dBu values. By now, you have probably figured out the root cause of this problem: analog and digital levels are simply not the same!

As you remember, dBu indicate voltage ratios in RMS levels, while dBFS have a fixed scale and state peak levels. Therefore it is not possible to compare both levels against each other! Put simply, 0 dBu are not 0 dBFS - and the other way around!

But even more importantly, since the input and output level of a digital signal is defined by the operating level of the converter, converting dBu to dBFS is not possible!

Hence, there is no formula or method to match dBu and dBFS. The only way would be to take signal and measure the actual voltage and compare it to the digital level. But this is not practical!

Now that we know, that there is no such as a standardized way to match analog and digital levels. How can we approach this problem? 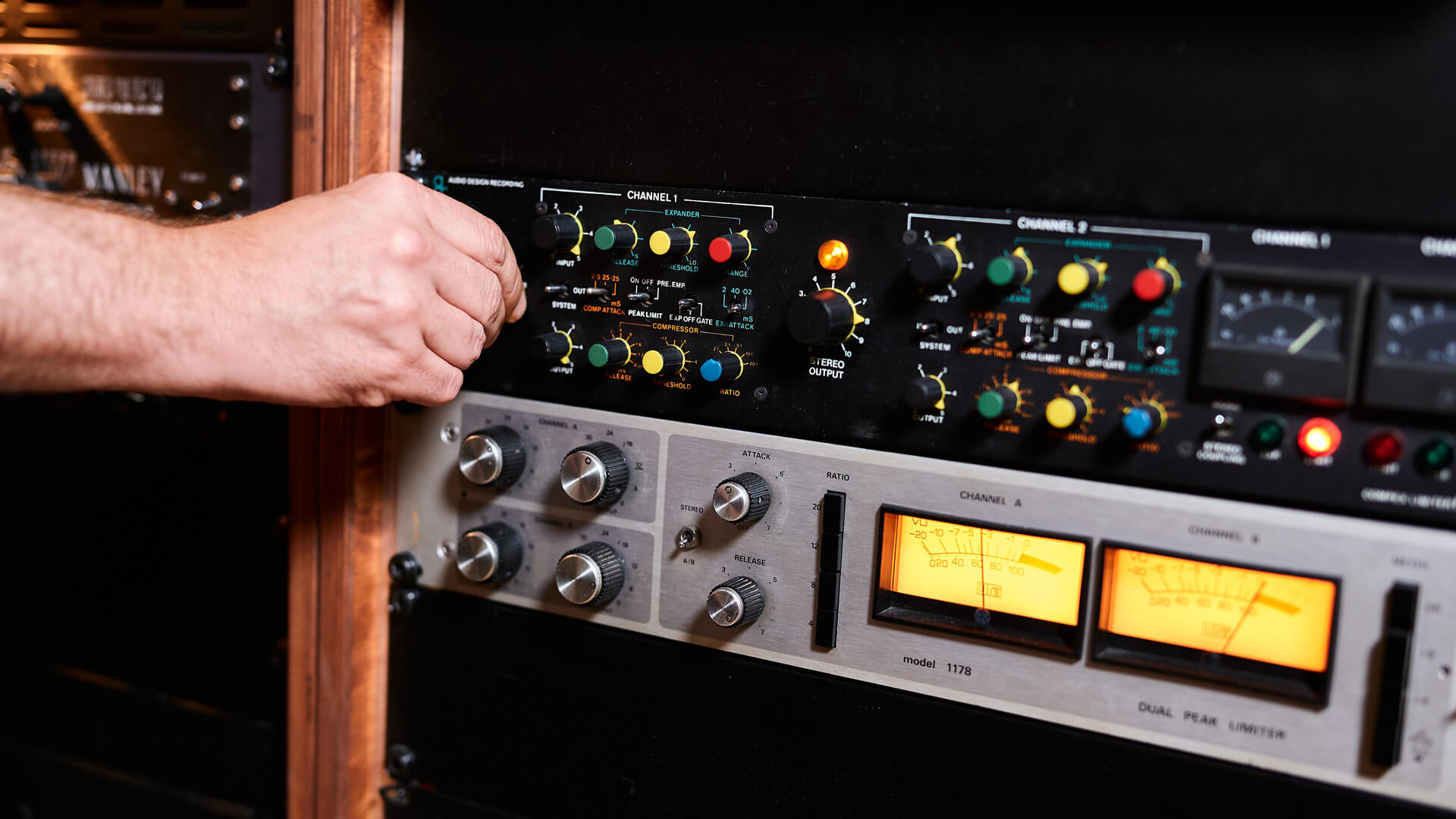 To overcome this issue, RME interfaces work with so-called reference levels - both for the input and output of the AD/DA converter. These reference levels will not only give you the exact dBu value, when reaching 0 dBFS in your DAW or TotalMix FX, but also the available headroom in relation to the analog studio level.

For the analog inputs, we have two reference levels available: Lo Gain +4 dBu and -10 dBV.

For the analog outputs, we have three reference levels available: Hi Gain, +4 dBu and -10 dBV.

These reference levels are also found in all other RME devices. Therefore they are fully compatible to each other

Now that we have everything we need, it is time to put our newly gained knowledge into practice. I have set up a UFX+, which is connected to an xfilter from elysia via input and output channels 3/4 over TRS cables. If you want to learn how I connected the xfilter to the interface, watch our dedicated video!

The xfilter is a stereo analog equalizer with 4 bands that can add up to 16 dB of gain. With a maximum input and output level of +21 dBu, it is very well advised, to use a moderate level, when going into the xfilter.

Let’s imagine we send out an audio signal from our DAW that reaches 0 dBFS. With Hi Gain engaged, outputs 3/4 would sent out an analog signal with an average of +19 dBu into the xfilter. This would mean that you would only have around +2 dBu of headroom, before overdriving the output stage of the xfilter.

Therefore, instead of using the full power of the UFX+, we set the reference level for output 3/4 to +4 dBu, resulting in at least +8 dBu of headroom - so plenty enough leeway for boosting certain frequencies!

For the analog input of the Fireface UFX+, on the other hand, we select the Lo Gain reference level to have a maximum input level of +19 dBu. Remember, the xfilter can reach up to +21 dBu when set to maximum. This surpasses the analog input of the UFX by +2 dB, but is in practice negligible, because it’s rare to add this much of EQ gain to a signal.

But if you want to be completely on the safe side, you could incorporate an RME converter into your setup, that could handle up to +24 dBu like the ADI-2 Pro FS or the M-1610 Pro!

Last but not least, all signals can be monitored in TotalMix FX or DIGICheck - clipping is now a thing of the past!